Interdisciplinary Interpretation on the Works and Time-space/ Discourse between Arts and Society Since 2002, the Taishin Arts Award has annually presented awards to the year's most outstanding creative expression exhibitions or productions that may showcase professional achievement. This year, however, in response to the cross-disciplinary trend in contemporary art, as well as the reflections on driving forces of current social phenomena, the Taishin Arts Award no longer categorized the nominated works; instead, it conducted interdisciplinary assessment based on three broader principles-"spirit of the time"," humanities concern", and "futurity". This is by far the most significant reform in the ten-year history of the Taishin Arts Award, breaking the boundaries of artistic categories in order to accommodate greater possibilities for artistic creations. With this in mind, and also to incorporate the public participation and attention to the selection mechanism, the Taishin Arts Award had launched a brand new online platform "ARTalks" and appointed seven scholars and experts, who have long observed the development of contemporary art, as independent nominations. The nominators submitted independent observation reports, from which fifteen nominated works were chosen as finalists upon discussion and assessment. A review committee consisted of nine members—including three representatives of Taishin Foundation Board members, five distinguished arts professionals, and scholars, and two chairmen elected from the initial nomination committee—the went through four rounds of discussion and voting to determine the five short lists will each be awarded 500 thousand dollars. With participation of international experts, the jury will eventually select one annual Grand Prize winner. The annual Grant Prize winner will receive a monetary award of 1.5million NT dollars, and the other four shorts lists will each be awarded 500 thousand dollars. We hope the dialectics triggered by public participation and discussion can be combined with a professional and just assessment mechanism that features year-round observations and nominations, as well as art reviews and critiques, to recognize and honor Taiwan's outstanding achievements in the arts. This exhibition is a curatorial response to Taishin Arts Award's brand new direction and interpretation after major reform. In the history of contemporary museum development, art museums have two growingly evident traits—its spatial environment is now incorporated to form the context through which works can be interpreted; this also has given art museums a more powerful function that can extract the inner quality of the works. In other words, for a work of art, regardless of whether it belongs to the traditional categories of "visual art" or "performing art", art museums can timely enhance the dynamics for it to venture into other disciplines or break free from the limits of artistic forms, allowing the interdisciplinary work and its presentation to escape from their dualities in juxtaposition (or polarized dualities) to manifest an integral possibility. This allows the reform of Taishin Arts Award and the curatorial concept of Museum of National Taipei University of Education(MoNTUE) to be put into practice at this exhibition. The five short lists of this year's Taishin Arts Award are naturally "artworks" that have taken place in certain time and space, as well as in certain conditions, in the past. They could be regarded as having been categorized already according to all the existing criteria for art categorization, such as stage, theater, and exhibition space; thus, within the boundaries of realistic forms of contemporary art, the visitors that were present at these shows may not necessary fully understand the artists' creative consciousness and their bravery in facing highly risky interdisciplinary integrations of forms. Through this exhibition, we specifically enhance the possible spatial and temporal flexibilities of MoNTUE in an attempt to enable, as much as possible, all five outstanding works to be "present" on this foundation of synchronicity, so that the audience (whether they have seen the works or not) can better sense the glittering and everlasting charms of these works. 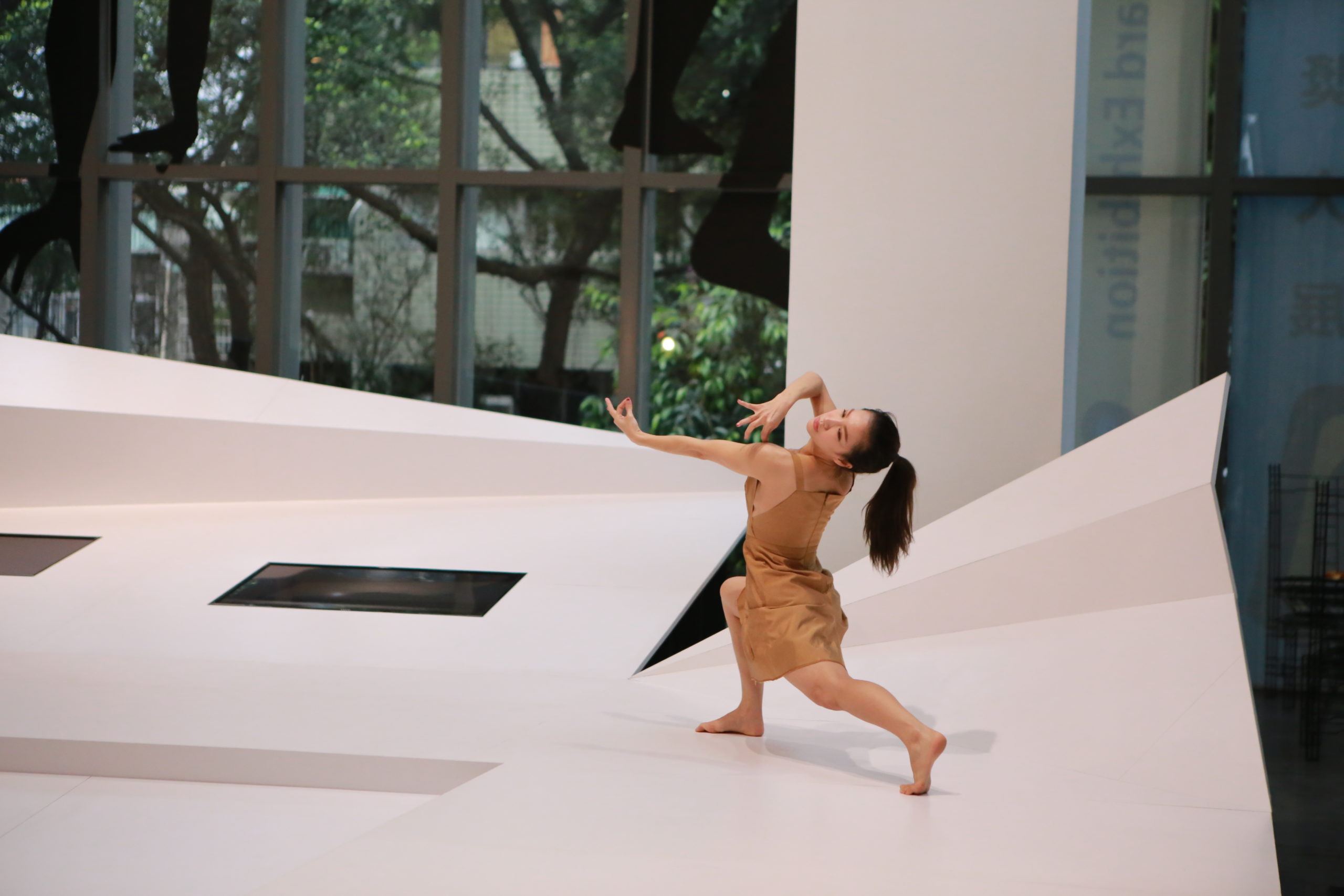 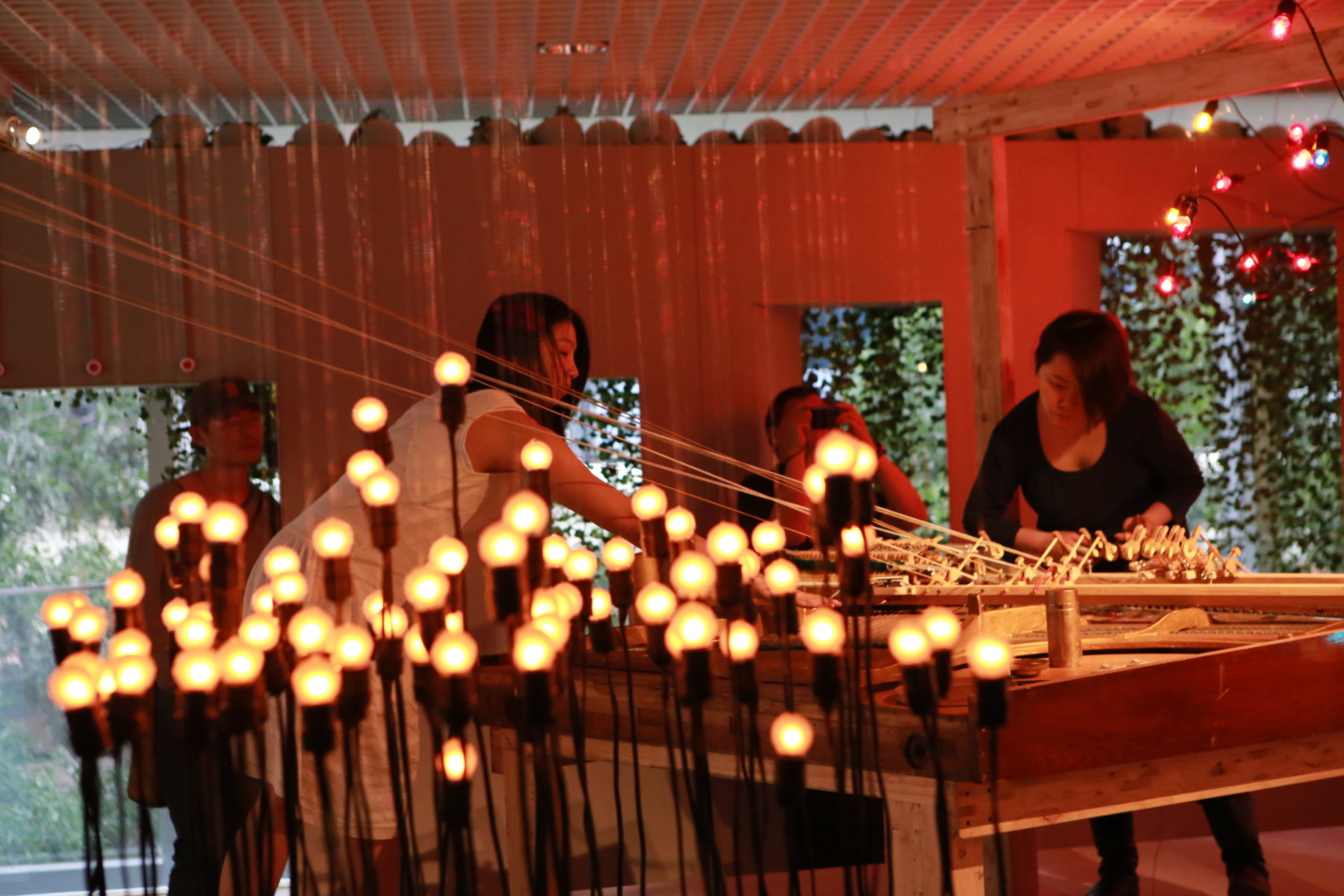 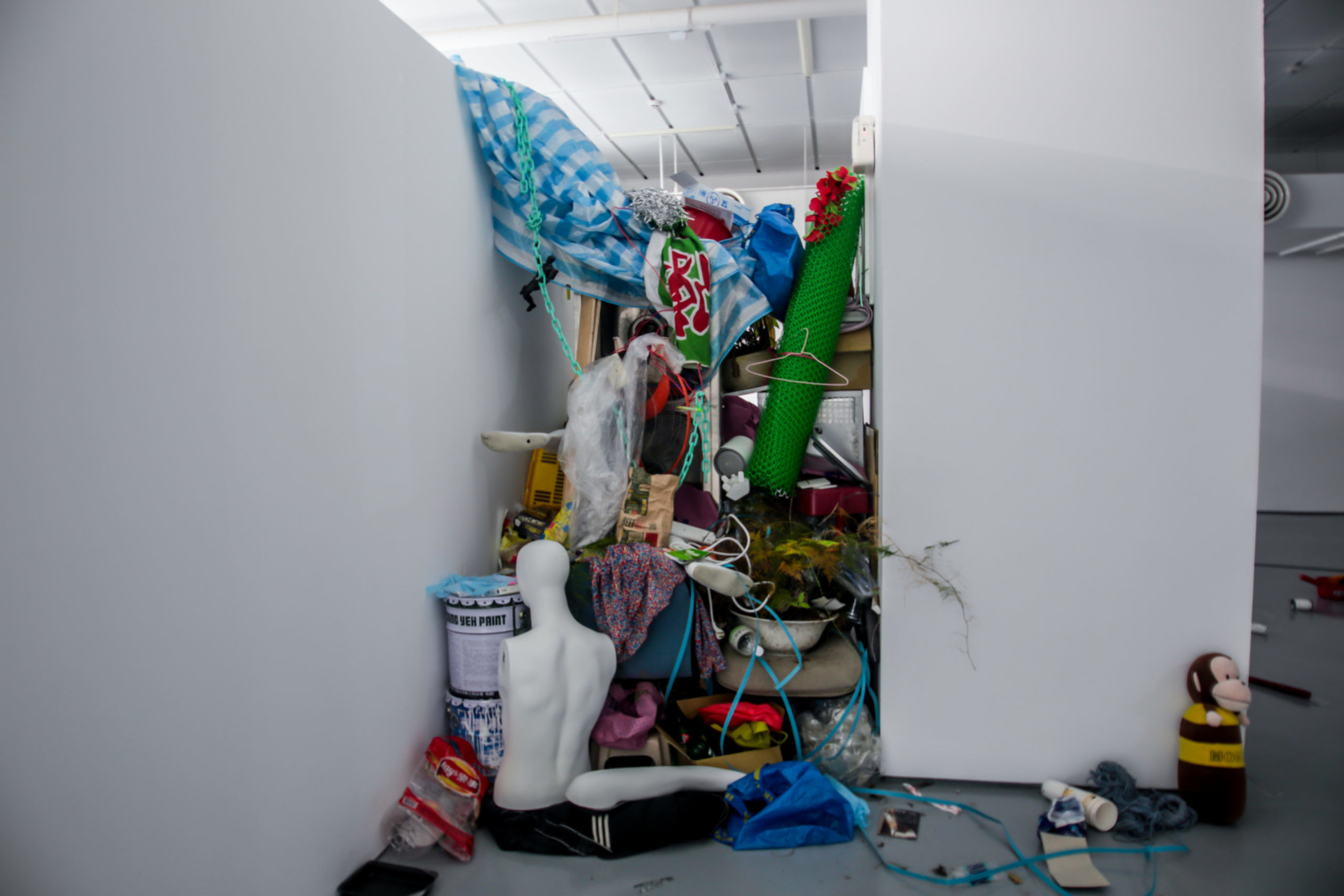 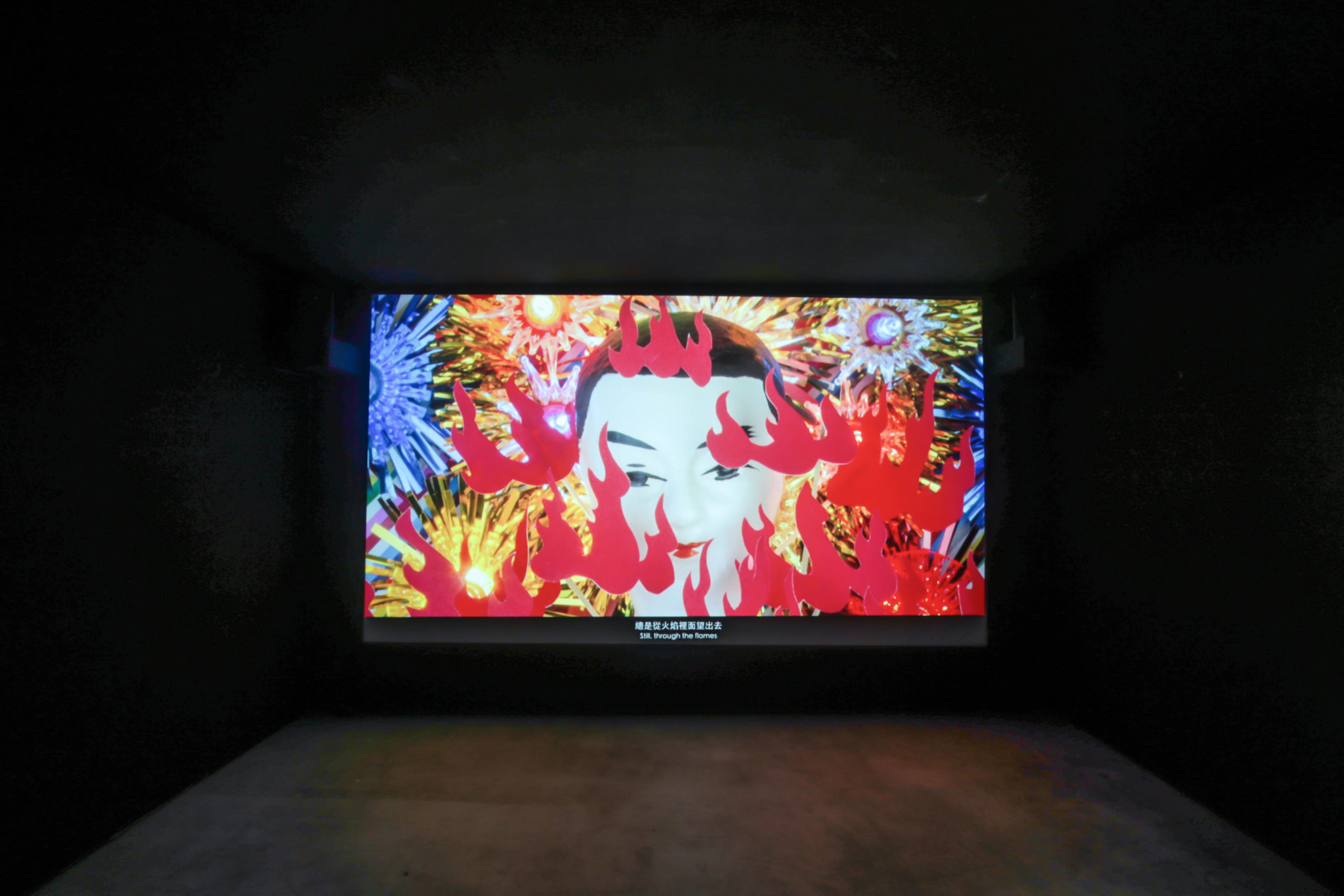 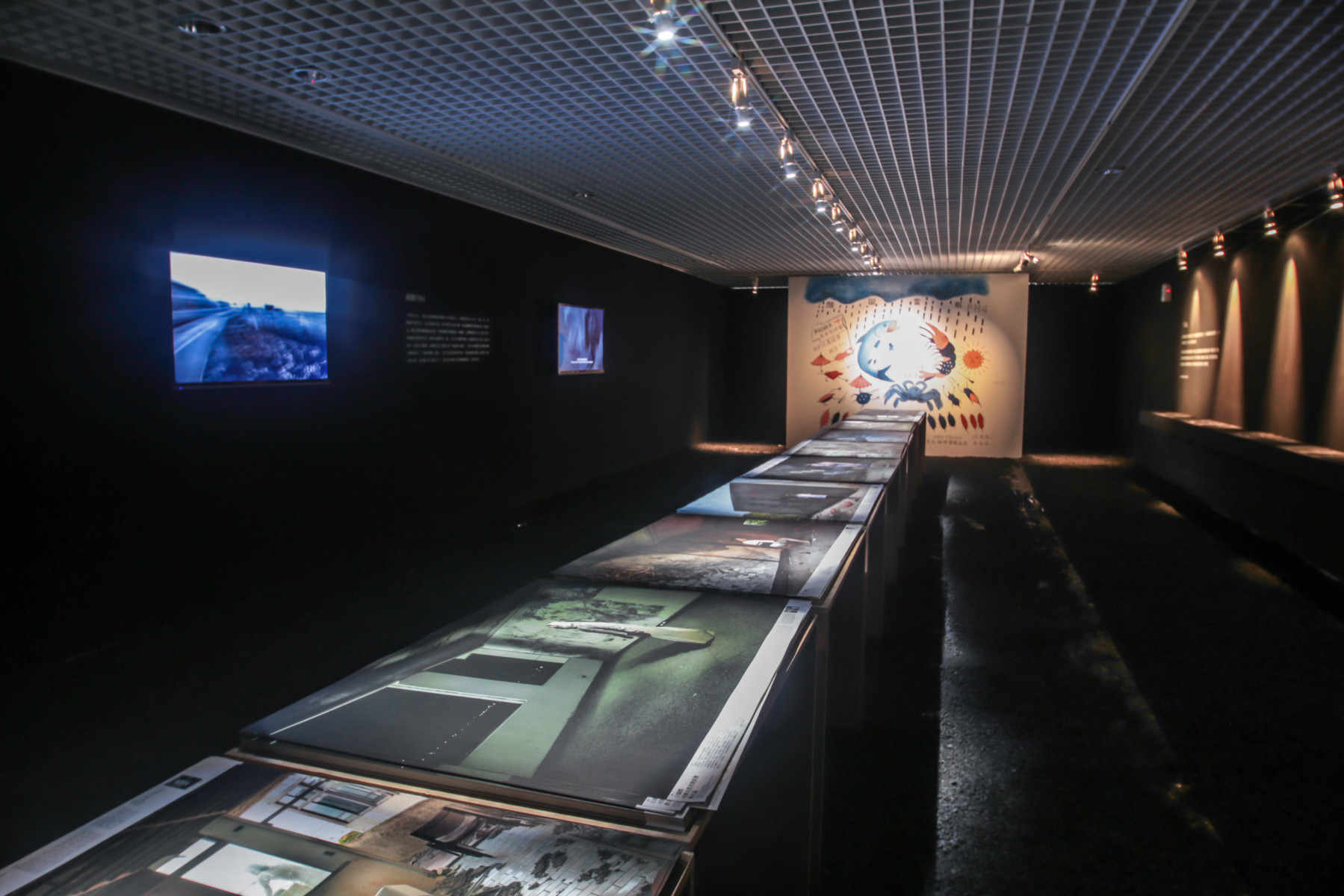